For the second time in just seven months, the Academy of Country Music handed out its annual awards. After the 2020 ACM Awards were delayed from April to September because of the pandemic, the organization moved the show from Las Vegas to Nashville for the first time in its history. And if those ACMs made a point of being transparent in their approach to Covid safety, this year’s show did the same in the way it addressed country music’s inclusivity problem.

That much was evident from the early minutes of the show, which featured co-host Mickey Guyton trading jokes with Keith-frickin-Urban as he talked up the idea of “celebrating progress,” Kane Brown having the time of his life with Chris Young on their duet “Famous Friends,” and “The Git Up” singer Blanco Brown, now recovered from a near-fatal traffic accident, presenting the night’s first award while carrying an enormous leather bag (can we normalize this for men?). But prominently showcasing three artists of color before the first commercial break didn’t come across as front-loaded lip service: The broadcast featured several artists of color as well as members of the LGBTQ community throughout its three-hour runtime.

As with the 2020 ACMs, the night’s performances, a mix of live and pretaped segments, were staged at the Grand Ole Opry House, Ryman Auditorium, and Bluebird Cafe, along with a couple brief cameos by downtown Nashville in the wild. And as before, Covid safety guidelines were both in full effect and visible. That meant no unnecessary risks or worries about trying to present an elaborate live television event on a single arena stage. With the ACMs building on lessons learned from last year and also taking cues from an excellent 2021 Grammy Awards, it was difficult to find much the show did wrong.

If we’re being really nitpicky, there were unfortunate audio editing/syncing issues during Dan + Shay’s performance of “Glad You Exist” at the Bluebird. And the night’s top prize of Entertainer of the Year going to an absent Luke Bryan (Was he home, as co-host Keith Urban said? Or in L.A. for American Idol? Who knows!) is somehow even more head-scratching than the tie between Thomas Rhett and Carrie Underwood last year.

Speaking of Underwood, she brought the house down with a medley of hymns from her album My Savior, doing formal takes on “Amazing Grace” and “Great Is Thy Faithfulness,” and then bringing in gospel legend Cece Winans to take everyone to church for “The Old Rugged Cross.” Their virtuosic riffing back and forth was outstanding, but Underwood had her knockout punch loaded up with “How Great Thou Art.” It somehow remains a showstopper every time she sings it, as if she’s trying to rip a hole through the roof of the building and reach out into the stars.

Over at the Bluebird, Chris Stapleton turned everyone in this writer’s household into a sobbing, snotty mess with “Maggie’s Song,” which he wrote about saying farewell to a beloved old dog. As a bonus, Miranda Lambert sat in with him on backing vocals for her second performance of the night. Later, she’d give a Bluebird-intimate performance on the Ryman stage with her Marfa Tapes collaborators Jon Randall and Jack Ingram on “In His Arms,” all elegant acoustic lead guitar and aching harmonies for a too-short two minutes. If this were a competition, and it kind of is, she would be winning. (Despite not winning a single award this year, Lambert remains the winningest artist in ACM history.)

Maren Morris was a big winner, taking Female Artist and Song of the Year for “The Bones.”  “This song has revealed so many new things to me that I didn’t know were possible the day I wrote it,” she said. She also gave a steamy, I-think-they-are-really-in-love performance with husband Ryan Hurd on the duet “Chasing After You.”

Ashley McBryde exuded some tough bar-band energy in her outdoor rendition of “Martha Divine.” Thomas Rhett interrupted his very good song “Country Again” to perform his song about other songs “What’s Your Country Song.” Kenny Chesney, who was dressed in his traditional awards show attire of polo and dress slacks, was used more effectively as Kelsea Ballerini’s duet partner than as the lead-in for an abrupt In Memoriam segment. Regardless, Chesney seems to be getting better with age — even as he does not seem to be aging at all.

Sidenote: It has apparently been 20 years since Blake Shelton released “Austin” in the era of really surprising chord changes and people actually leaving voicemails rather than passive-aggressive read receipts with extremely delayed replies (you know who you are). 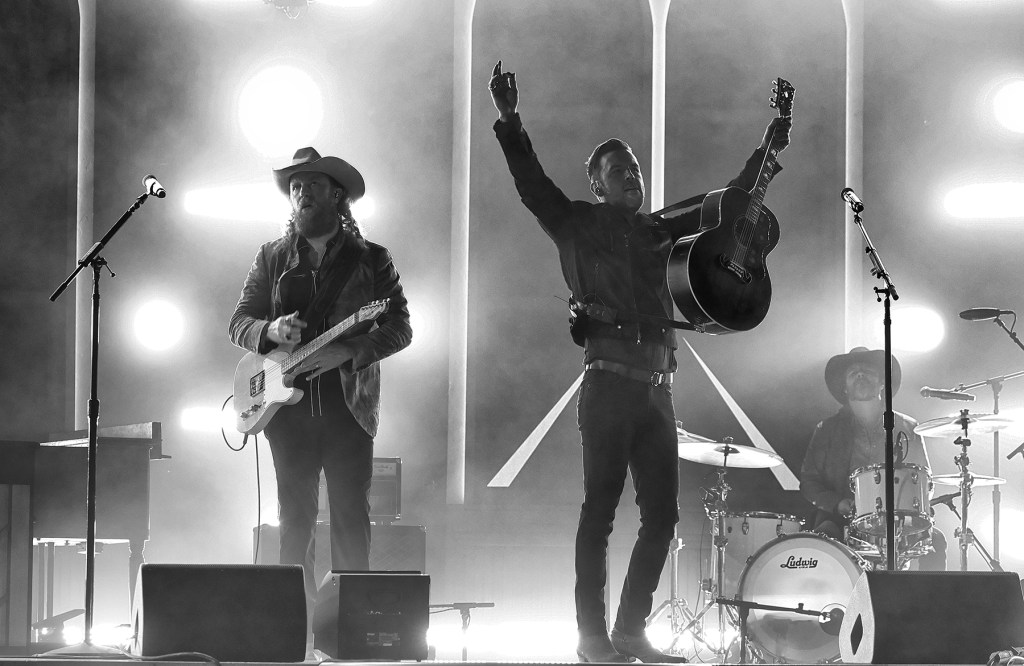 Elsewhere, New Male Artist of the Year Jimmie Allen got to sing with Brad Paisley at the Bluebird, Darius Rucker was up to present an award, and Guyton gave a masterclass in restraint with her performance of the prayerful “Hold On.” Dierks Bentley collected two of the best if most underrated duos in Larkin Poe and the War and Treaty to back him for a killer bluegrass rendition of U2’s “Pride (In the Name of Love).” Bentley, doing a passable grunge-dad look with his Covid locks, had the sense to stage this performance at the home of bluegrass in Nashville, the Station Inn, one of his early pre-fame haunts. Bentley also had the sense to step back and let the War and Treaty’s Michael and Tanya Trotter handle the vocal fireworks.

Eric Church was surprisingly skronky on “Bunch of Nothing,” rocking the Ryman with some full-tilt barrelhouse boogie. Church was also part of a PSA from the “It’s Up to You” campaign that aired during a commercial break and featured fellow stars Darius Rucker and Ashley McBryde urging everyone to get the facts on the Covid-19 vaccines. More direct was a regional Vanderbilt Health spot featuring Brad Paisley and a message about where college sports fit in: “Be a fan, take the shot.”

Even more direct than that was Little Big Town’s Phillip Sweet, who, like Luke Bryan, tested positive for Covid and had to miss the show. “Wear your mask, get vaccinated, and let’s all get back to live music,” Sweet said, before introducing his bandmates in LBT and their Broadway-strolling performance of “Wine, Beer, Whiskey,” featuring a drumline-plus-mariachi vibe.

Delightful human being Leslie Jordan, who should probably be considered for hosting duties at one or all of these things, had a good joke when he called himself “Portable Wagoner.” His new album features Chris Stapleton and Dolly Parton and is very good. Jordan’s one of Hollywood’s notable out celebrities, but he wasn’t the only out presence on the ACMs.

Brothers Osborne, featuring recently out-of-the-closet singer TJ Osborne, were one of a handful of artists to get multiple performances, and they didn’t disappoint. Playing live, not pre-taped, at the Ryman, their mid-show performance of “I’m Not for Everyone” featured a vocal solo from lead guitarist/backing singer John Osborne. It was imperfect in all the right ways. Their second, a show-closing performance of the blistering “Dead Man’s Curve,” took it up a notch, piling up riffs and playing deliriously fast like a couple of honky-tonk heroes who could go all night if they felt like it.

“Country music is a huge big family where everyone is welcome,” Urban said, just prior to introducing Brothers Osborne for that final performance. It can’t have been an accident that the ACM gave that ending note to a duo who can absolutely rip, and who happen to have a gay lead singer. Along with the Academy’s other unmistakable efforts at making the show a more inclusive space, it was a crystal-clear statement about what they expect the future of country music is going to look like.

A Toast to Jim Steinman: The Songwriting Powder Keg Who Kept Giving Off Sparks

Watch Alanis Morissette Perform ‘I Miss the Band’ on ‘Fallon’

A Toast to Jim Steinman: The Songwriting Powder Keg Who Kept Giving Off Sparks

Watch Alanis Morissette Perform ‘I Miss the Band’ on ‘Fallon’

Charlie Worsham Won’t Be Stopped in New Song ‘Fist Through This...

Ryan Hurd and Maren Morris Perform ‘Chasing After You’ at the...

Every Breath You Take Review: A Strong Cast Outshines A Mediocre...

Is 'SNL' New Tonight? Here’s What We Know About the Next...

Every Breath You Take Review: A Strong Cast Outshines A Mediocre...