Earlier this week, Action Bronson released his third book F*ck It, I’ll Start Tomorrow: A True Story, which delves into the rapper’s weight-loss journey as well as a period of self-discovery sparked in part by the Covid-19 pandemic.

In these excerpts from the book — part-self-help guide, part-memoir — Bronson looks back at his youth as a “husky” child, explains why the Atkins diet doesn’t work, details the importance of nutrition and discusses why he loves his body regardless of weight. “I think I look gorgeous, like the shining light in this fucking bitter world,” he writes.

Bronson also reveals the inspiration behind the book’s procrastinating title: “For me, it’s always ‘Fuck it, I’ll start tomorrow.’ But, you know, tomorrow never comes. I was talking to my friend about how you always have to start your diet ‘tomorrow.’ But tomorrow always has to be on Monday — you have to start fresh in the week. You can’t start a diet on a Tuesday or on Wednesday, that can’t be tomorrow. Tomorrow can’t be on a Friday, because you want the weekend. You want the weekend for your last hurrah.”

Action Bronson Hated Writing His New Book, But He Knows He Needed To

Action Bronson on Hipster Food and Why He Won't Eat Mackerel

As Bronson told Rolling Stone, he “hated” writing this book, but it had to be written. “This was written while I was around 400 pounds,” he said. “There was no reason for me to be doing anything like this. But when you turn it around, it’s like, you know what? I hate it for a reason. Because it turned the mirror on me, on my soul, and it forced me to change. It forced me to look at the things I didn’t like right in the face. It’s heavy shit, bro.”

So look, obviously I’ve been up and down in weight my entire life. Up and down, up and down. But I’ve always been a husk, I’ve always had this shape. Back in 2000, I was 230 pounds—I was in shape. I was strong, but I still had this body. To be honest, I don’t even look at a scale anymore.

We’re all built in certain ways, and that’s why we look like certain shapes. Body structure, man, everyone has that different shit. Really, all of us are shaped weird, when you think about it. Some people might have very thin legs and an ass that’s a fatty, or a rounder. There are people with huge stomachs, like I know people who just can’t see anything when they look down. There are some people who only have huge asses, like weirdly huge asses, and then a little waist and legs. They look thin when they’re sitting down, and when they get up, it’s like a fucking huge spare tire on there. We once knew a girl in junior high school who had that body, and we heard she became a hooker, a woman of the night, and then later, she became a person of the church.

My form is pretty strong up top, then I get more thick by the thigh. I have thick, big legs and I have a flat ass. I have a little stomach hangage, but it’s a normal level of hangage. My stomach isn’t as protruding as another fat man’s, but I’m wide. I just somehow collected all this fat on my love handles, like a muffin ass, a muffin top. I have one big love handle, and you know, I’m a box, a square. But I’m a fucking strong square.

I love my shape, also. I want you to know that. I think I have a great shape. I mean, obviously I am three hundred fucking pounds and I’m a square. But I think I look gorgeous, like the shining light in this fucking bitter world.

I honestly didn’t even know I was fat, when I was younger. I thought I was just husky. The part of the store where I bought my shirts was called Husky, and that’s what my mom would always call me, that or hefty: You’re a hefty boy.

And I was. My thighs used to get so violently rashed in my youth that I had a special pair of biker shorts that I had to wear just to separate them. My legs were creamed and powdered under the biker shorts, like I was a piece of chicken. My mom actually pulled out a measuring tape from her purse the other day—she said she had been carrying it around since I was a little kid so she could measure my thighs when she was buying me pants. But I wasn’t ever embarrassed: I just decided to not care what people thought; to see how it was funny. That’s the art of it—when my mom had to do that, I just thought it was funny. Like I said, I had a sick confidence.

I wasn’t embarrassed then and I’m not embarrassed now because that’s growing pains. Maybe most people would be mortified. It’s a mortifying thing. But I’m built different. They don’t build ’em like me. I say, don’t give a shit if you’re embarrassed about certain things. Make yourself laugh. Who’s making fun of me? I don’t care, go fuck yourself.

That’s also what makes your skin thick—when you’re not what the world thinks you should be, when you grow up a chunky, husky boy. That’s also how you become a fucking better human being. I knew early on that maybe you think you look funny; you just have to love yourself extra hard. Like I said before, my mom taught me that.

So I wasn’t one of those guys that wore their fucking T-shirt all the time at the beach—it gets so fucking long, you’re nearly drowning in it. You’re a little overweight. So? 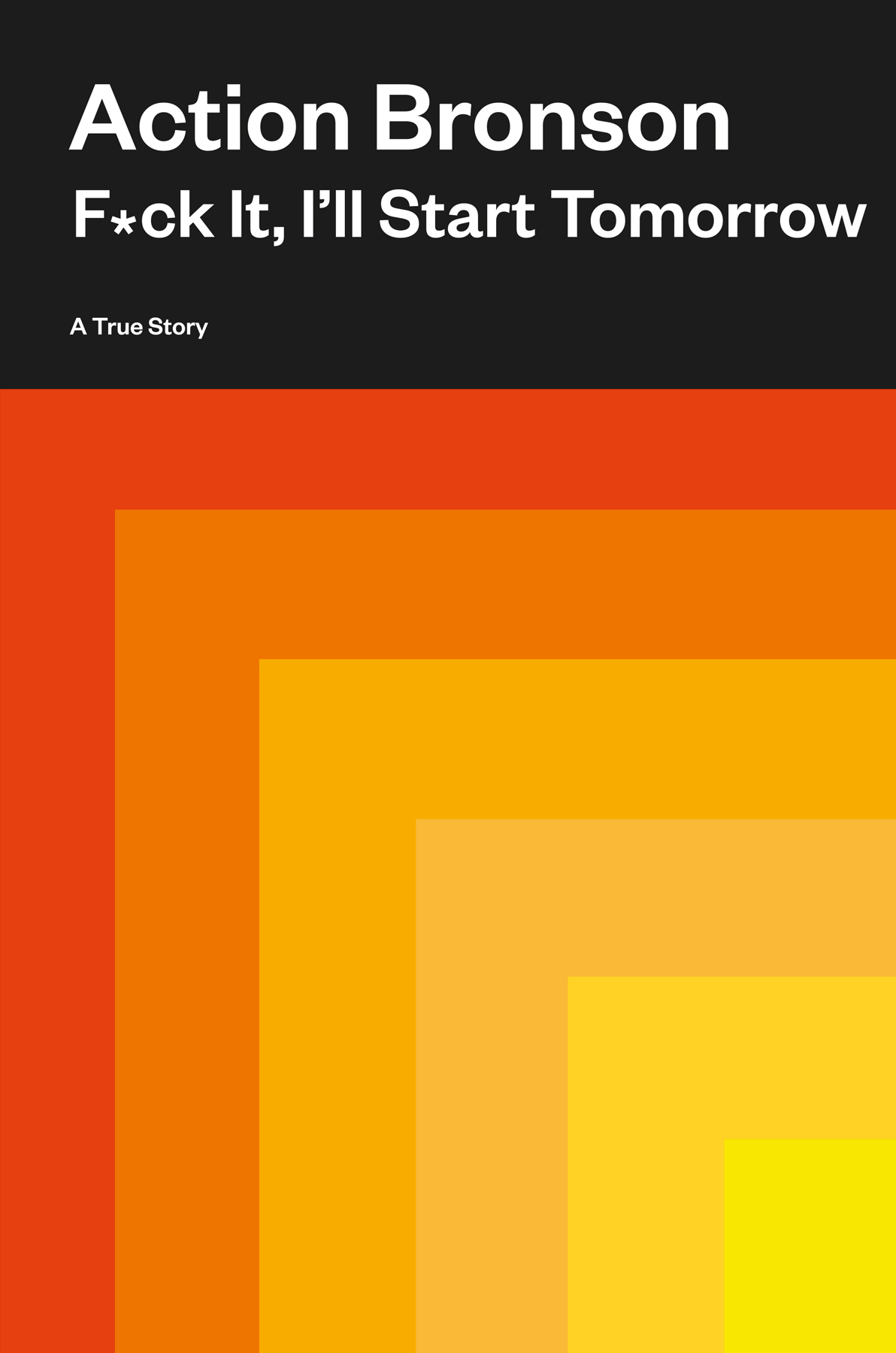 I think one of the only real diets I ever did in my life was Atkins, a long time back. You were straight-up allowed to eat sausage and bacon, cheese and eggs—mostly protein. I did it for three weeks, and I lost forty pounds in those three weeks.

I kept it off for a week. It comes right back because it’s fake weight loss. You eat one piece of bread and it’s over, it’s a wrap. Plus, when you’re on it, you shit like a fucking pig, like a fucking animal. It’s despicable. Everything comes out of you at once. You can’t even go anywhere like that, you can’t work out like that. I am glad Dr. Atkins died a horrible death, because he fucking made people sick. He died from being on Atkins. You’re in something called ketosis: your fucking body is eating the fat away, but it is also eating muscle, so it makes you a frumpy fuck, and then you try to work out and you shit yourself and you have no energy. I was just like, Damn, I might as well just eat some bread.

The hottest new thing in dieting now is the fasting where you’re not technically fasting, you just don’t eat for most of a whole day. I just don’t feel you get optimum performance out of your body when you fast, if you’re doing any kind of physical activity or thinking. You get light-headed and fucking loopy and weird. Maybe sometimes good art comes from that feeling. But not everyone’s an artist. Some- times you need to go do a fucking one-hundred-page architectural report on a Japanese building, you know?

It’s been a long time since I was on an actual diet, but as I said, you’re still always dieting in your mind, if you’re like me. I’m like, Damn, you know, I need to be healthy. Your mind is like, Nah, don’t do it. Don’t eat the bagel. But then your body is yearning for it, so you give in to the carnal lust of the food.

And think about how hard that is for me. Food is what I do.

So for me it’s always Fuck it, I’ll start tomorrow. But, you know, tomorrow never comes. I was talking to my friend about how you always have to start your diet “tomorrow.” But tomorrow always has to be on Monday—you have to start fresh in the week. You can’t start a diet on a Tuesday or on Wednesday, that can’t be tomorrow. Tomorrow can’t be on a Friday, because you want the weekend. You want the weekend for your last hurrah.

I have had a lot of last hurrahs with ice cream and sodas, and like a drunk or a drug addict, I go out with a bang . . . I mean, I have a last hurrah every day in my mind. I’m always like, Ah, this is the last fucking ice cream. In my mind, I’m like, Yo, I’ve got to really do this, you know? And then I end up waking up in the middle of the night and having ice cream, or in the morning I’ll think, I’ll just have a taste. We’re the type of people that have to, you know, get the ice cream, take a couple scrapes, or whatever it is you do with an ice cream.

And it’s not like I am even looking for the newest diet to do. I know what to eat every day. I went to culinary school; I made a 100 in nutrition. My body maybe doesn’t show it, but I know what the fuck nutrition is about. I know what you need to have. I know what’s really good, what’s wholesome.

Today I am mainly working toward being healthier for my family. I’m working toward that. These days I know it ain’t just about weight or how much I can lift. It is not about shedding pounds. It’s about overall well-being. It’s about living a fucking healthy life, period. It’s about having an alkaline body that disease can’t live in. About putting the right thing in your body or your lungs, if you’re going to put anything in your lungs. It’s about having a healthy brain, about being happy and mentally healthy. Now my time is spent trying to be a very healthy person, you know? And a successful person, in many ways, in many things.

You can be a little bit of a husk and overall be a very healthy person, there’s no doubt about that.

'Captain America 4' in the Works From 'The Falcon and the...